Traders & Barbarians is distributed as the third major expansion for The Settlers of Catan, although it is actually a compilation of small expansions and variants. It is independent of the Seafarers and Cities & Knights expansions, but can be combined with them.

Well-tried variants such as "Catan Event Cards," "Harbourmaster," and "Catan for Two" offer alternatives for customizing the game to your own needs. In addition, the 2-player variant allows you to play the Base Game as well as all scenarios of this expansion against only one opponent. 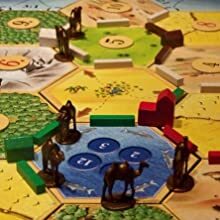 As the "Fishermen of Catan," we experience how fishing not only adds to the menu but also opens up completely new tactical possibilities.

In the second scenario, "The Rivers of Catan," the rivers prove to be true lifelines. If you build roads and settlements adjacent to the rivers, you can easily make a fortune. If you arrive too late, you may well become a poor settler and have a hard time trying to get rid of this disadvantage. 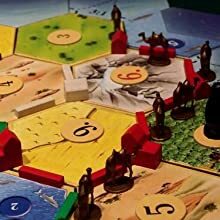 In the third scenario, nomads have settled in the oasis. Since they are lacking wool and grain, they send out caravans to barter for the coveted resources. Of course, everybody wants to profit from the "Caravans," but sending the caravans to one’s own settlements isn't all that easy. 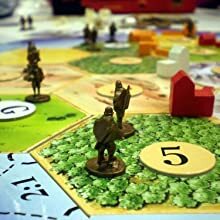 Catan’s wealth doesn’t go unnoticed. And thus it doesn’t take long until the "Barbarian Attack" descends upon Catan’s coasts. Now it is imperative that the Catanians close ranks and train knights. The knights rally for battle - not altogether selflessly, because each captured barbarian is worth half a victory point. 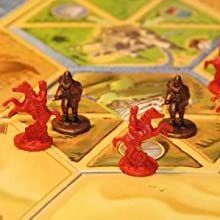 The base game (available separately) is required to play.

This product is subject to specific safety warnings

Warning: Not suitable for children under 36 months