Promotions, new products and sales. Directly to your inbox.

There is a darkness spreading through Rokugan. War is on the tip of everyone’s tongue and chaos has come to the Imperial Capital. Meanwhile, the Crab Clan fights valiantly to defend the Emerald Empire from the shadows spreading in the south. With Rokugan as unstable as ever, can the samurai of Rokugan stop the spreading darkness?

Fantasy Flight Games is proud to announce Spreading Shadows, the second dynasty pack in the Dominion cycle for Legend of the Five Rings: The Card Game! 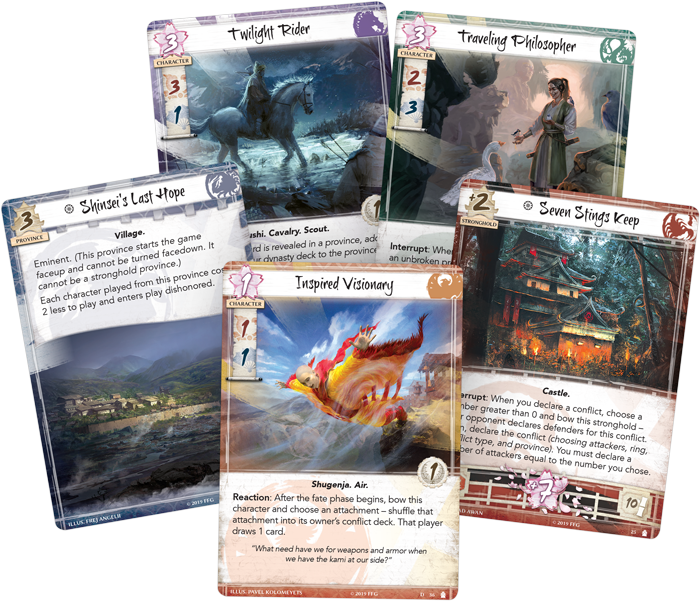 Amidst the chaos surrounding them, the Scorpion are thriving, always one step ahead of their foes. Nothing emphasizes this more than Seven Stings Keep (Spreading Shadows, 25), a Stronghold that completely flips conflicts, forcing your opponent to select defenders before they know which Scorpion samurai will be waiting for them or even where the conflict will be taking place. There is a big difference between a force led by Bayushi Aramoro (Underhand of the Emperor, 8) and one led by an Adept of Shadows (Core Set, 180), and your opponent may not know what awaits until it’s too late. Of course, in this scenario you know exactly who to commit based on your opponent’s defenders, and can respond appropriately. This is a devastating ability, and though it can essentially only be used in one conflict a turn, it can change the tide of battle in favor of the Scorpion. 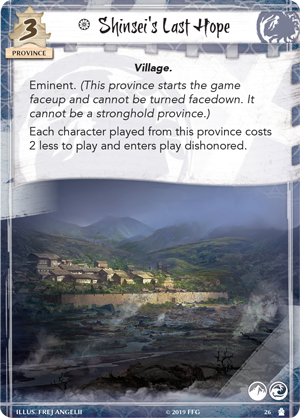 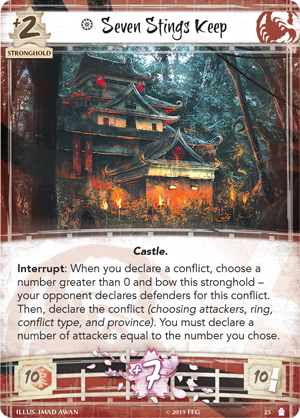 While the Scorpion take power in Otosan Uchi, the Crab continue fulfilling their duty in the south. Every day more and more scouts make their way into the Shadowlands, risking life and limb to protect the land they call home. There is one respite in Shinsei’s Last Hope (Spreading Shadows, 26) a bastion of safety in the deadly web of the Shadowlands. Any character who enters play from this new Eminent province becomes dishonored, but costs two less fate to play. The Crab care little about their personal honor in the face of the utter destruction of Rokugan, and the fate you save could mean the difference between victory and defeat.

Of course, strongholds and provinces mean little without the protection of the brave samurai of the Emerald Empire. These samurai utilize blades, words, and even the elements themselves to protect themselves against the spreading darkness, but some samurai need no tools at all, just a vision. The Inspired Visionary (Spreading Shadows, 36) does not have the gift of words or steel, instead relying on the Kami to win conflicts by stripping your opponent of their attachments every turn. While they aren’t going away permanently, you can ensure that your opponent’s most essential tools are nowhere to be found when they need them most. 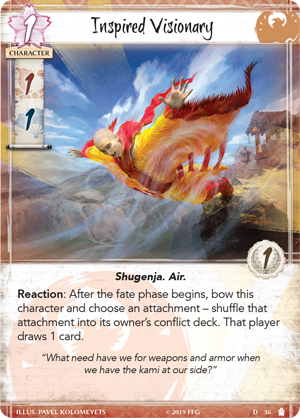 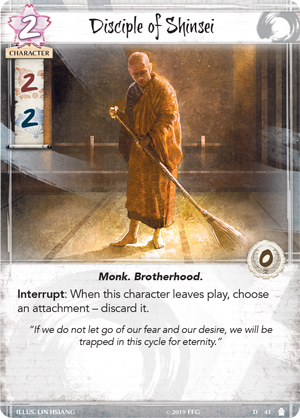 And the Visionary isn’t the only character remove attachments in Spreading Shadows. The Disciple of Shinsei (Spreading Shadows, 41) is an unassuming Monk who leaves a lasting imprint on the battlefield with his ability to discard any attachment when he leaves play. This can range from removing a deadly poison infecting one of your samurai all the way to depriving your opponent of their finest weapons. With pure versatility, the Disciple of Shinsei would be a fine addition to any Clan’s dynasty deck.

Spreading Shadows also introduces even more Dynasty events and cards with the Rally keyword to Legend of the Five Rings: The Card Game. While death on the battlefield or in court is an honorable end, it isn’t the only way a Samurai’s time in conflicts can come to an end. A simple Dispatch to Nowhere (Spreading Shadows, 38) is a Scorpion trick to get rid of a potential problem in a diplomatic way. If you absolutely need to get rid of a samurai on the field, then a Dispatch to Nowhere during the dynasty phase might be exactly what your clan needs to gain momentum and achieve victory. 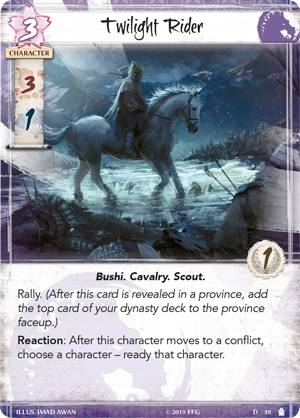 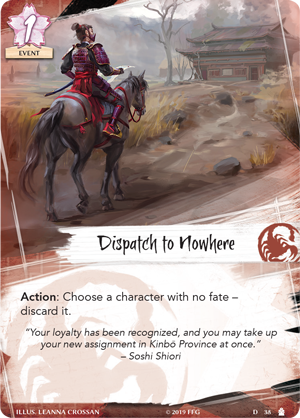 While the Scorpion use diplomatic tricks to rid themselves of their foes, the Unicorn are less subtle, using speed and numbers to quickly overwhelm any opponent. A Twilight Rider (Spreading Shadows, 39), for instance, not only readies another samurai when he enters a conflict, but also swells your ranks with the Rally keyword!

Finally, other characters and events in Spreading Shadows directly interact with provinces on the battlefield. For example, the Traveling Philosopher (Spreading Shadows, 34) can allow you to turn one of your provinces facedown, letting you trigger on revealed reactions a second time or strengthening a Mirumoto’s Fury (Core Set, 159). 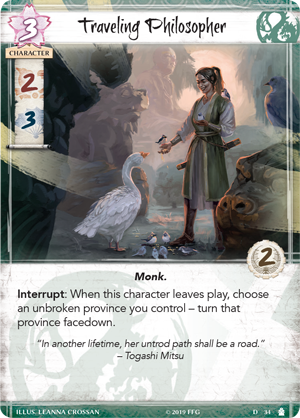 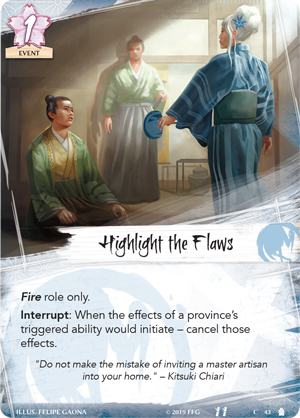 While the Dragon can hide their provinces a second time, the Crane can deny their effects. Highlight the Flaws (Spreading Shadows, 43) can only be used with a Fire role, but can be a vital asset at your most desperate hour, ignoring the effects of a province when they trigger.